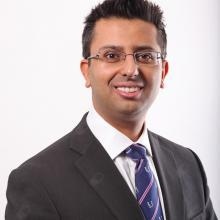 Mr Khemani graduated from Guy’s and St Thomas’ Hospital Medical Schools, London in 2000 and is a Fellow of the Royal College of Surgeons of England. H...

Middle ear surgery (including the stapes and mastoid)

It was a breath of fresh air to hear a surgeon say that they had a fix for my long-term ear problem. Mr Khemani explained the procedure to me very clearly and told how I would recover afterwards. Since my procedure my hearing has been improved greatly and I can now thankfully get my ears wet!

I came to see Mr Khemani recently at Spire Gatwick Park with a reduced sense of taste and smell. I found Mr Khemani to be very thorough in his history taking and very clear in his explanation of the condition. I would highly recommend seeing Mr Khemani for any ENT problems in the future.

I have had problems with my ear for about 17 years. I've seen countless ENT surgeons and had 4 operations in the past. A friend at work recommended that I go and see Mr Khemani. After 17 years he has "fixed" my ear. No discharge and no smell! I would recommend him to anyone with an ear problem.

I found our experience with Dr. Khemani to be excellent. He treated our 6-year old son, who is quite challenging. Dr. Khemani was very comfortable with children and anxious parents. He ensured we understood the diagnosis and treatment. He was thorough, so we knew we were in very good hands.

I took my Nan (with her reluctance) to see Dr Khemani as we were worried about her hearing. Dr Khemani was very calm and friendly and was obviously very approachable, as my Nan soon settled down and opened up about issues we didn't otherwise know about. I would definitely visit Dr Khemani again.

Mr Khemani treated my 3 year old daughter. He was warm and friendly, and she was more than happy to let him examine her, which is unusual for her! She told me it was 'fun' afterwards. His explanation to me was clear, and I felt reassured and confident in his diagnosis. Would highly recommend!

Mr Khemani saw my daughter for problems with her hearing and delays in her speech development. We were impressed with his caring and patient nature. He explained things very thoroughly so that we could easily understand. Now, after having grommet surgery, my daughter can hear without any problems!

Mr Khemani graduated from Guy’s and St Thomas’ Hospital Medical Schools, London in 2000 and is a Fellow of the Royal College of Surgeons of England. H...

Mr Khemani graduated from Guy’s and St Thomas’ Hospital Medical Schools, London in 2000 and is a Fellow of the Royal College of Surgeons of England. He underwent higher surgical ENT training in the North Thames region of London, working at a number of prestigious surgical centres including University College Hospital, Charing Cross Hospital and the Royal National Throat Nose and Ear Hospital.
Mr Khemani spent a year in educational research, which culminated in him being awarded a Masters in Surgical Education with distinction from Imperial College London.
In March 2012, Mr Khemani was appointed as a full-time Consultant to the Surrey & Sussex NHS Trust and later appointed as the Lead Clinician for the ENT department. He has taken an active role in teaching and leadership within the region.
In addition to extensive experience in the medical and surgical management of general ENT conditions, he also has an active interest in all aspects of paediatric ENT. His subspecialist expertise includes all types of ear problems including the surgical management of hearing loss and discharging ears as well as the management of balance disorders. He also has special expertise in snoring and sleep apnoea, voice and sinus problems.