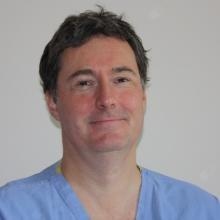 Luton & Dunstable Hospital, The
The specialist doesn't offer online booking in this address

Mr Whitelaw qualified from Edinburgh University Medical School in 1990. He underwent his higher surgical training in a number of London hospitals incl...

Mr Whitelaw qualified from Edinburgh University Medical School in 1990. He underwent his higher surgical training in a number of London hospitals incl...

Mr Whitelaw qualified from Edinburgh University Medical School in 1990. He underwent his higher surgical training in a number of London hospitals including the Chelsea and Westminster, Hammersmith, University College, and The Royal Marsden. He took up his position as Consultant bariatric and pancreatobilary surgeon in 2004 and was appointed Clinical Director of surgery in 2009. The Luton and Dunstable is a nationally recognised centre of excellence for bariatric surgery and is the designated centre for the East of England and currently undertakes around 10% of the UKs bariatric operations annually. In March 2011 it was successful in becoming one of the designated centres for Central South England from Oxfordshire to the Isle of Wight. Mr Whitelaw offers a comprehensive weight loss service with the utmost care and consideration based on a multidisciplinary approach involving, consultant endocrinologists, specialist anaesthetists, psychologists, dietician and specialist bariatric nurses. Mr Whitelaw uses this multi-disciplinary team approach throughout both his NHS and private practice. Weightloss support groups are also run at both NHS and private practices for pre and post operative patients.

His other main interest is Laparoscopic biliary surgery, including cholecystectomy, laparoscopic bile duct exploration for common bile duct stones and ERCP for the endoscopic treatment of gallstones and obstructive jaundice.